Not every day do I get to use the word discombobulation, but when I do, it’s epic.

A few weeks ago, there was a small quiet celebration at my workstation when I read the headlines on HN that CentOS 7 had been released. I dunno why, but whenever there’s a new major release of a Linux distro, I get all excited to see what’s included.

An excuse to upgrade

This week, I needed to build a brand new virtual machine, so I decided to take this opportunity to start with 7. Using the updated, very well-designed installation interface, I performed the minimal install. After booting up and attempting to install packages and configure services, I discovered that my cheese had been moved!

People don’t like it when you move their cheese. They are just trying to get through the maze, they have it all under control and then, poof, someone moved their cheese. Now it’s a huge hassle to find it again. Change a hotkey or the case of the menus and all heck breaks loose.Scott Hanselman

The progress bar is visible for a grand total of 1.5 seconds—which is a shame because it’s a very pretty shade of purple—just before it vanishes and you’re greeted by the login screen.

I can’t find any official word on it (translation: I’m too lazy to look below the fold of the first page of Google results), but according to this thread on DigitalOcean, it looks like CentOS 7 has replaced MySQL with MariaDB.

I installed the mariadb and mariadb-server packages on my sandbox VM and it looked like most things are pretty much the same with a bit of rebranding—the mysql command still works.

As a level 14 Senior Apprentice of the Init.d Dark Arts, I know where all of the components live, how to string things together manually and generally where to look when something’s jacked up. systemd is a completely unknown quantity. I’ve never used it or seen it used before.

Imagine my surprise when I get this cryptic response from /sbin/service:

It took a good amount of Google-fu to get enough info on systemd to proceed with what I wanted to do, but ultimately I have chosen to embrace this opportunity to “explore the frontier”. I very much like the status data it provides for running services, such as listing the hierarchy of process IDs and the log tail (thus proving yet again that I’m a sucker for anything with fancy text formatting):

One thing I don’t like is the very cumbersome command name systemctl. Typing that leads to a ton of time-wasting typos, so I set the following alias in my .profile:

Impenetrable iptables (and not in a good way)

Out of the box, running iptables -L will show you that there are now almost 2 entire screens worth of firewall rules on a fresh install. I don’t personally have need for super complex firewall and NAT rules since I’m not configuring servers sitting directly on the Internet—I’m used to having a handful of ports open running on a (relatively) friendly network and blocking everything else.

A quick yum remove firewalld and I’m back in my comfort zone. Of course, on the way out, this uninvited dinner guest decides to take all of the silverware with it: iptables -L is completely empty. I documented the process I took to configure iptables below.

I know at some point I’ll have to actually face the music and look into firewalld, but today ain’t it.

Okay, well let’s take a look at the network interface

Speaking of networks, where is ifconfig?

The /sbin/ifconfig command comes in the net-tools package, which is not installed by default. So, do that.

Where’d all these extra characters on my network interface come from?

After installing ifconfig, it’s time to look at the machine’s assigned IP. The interface name has a completely different naming convention: 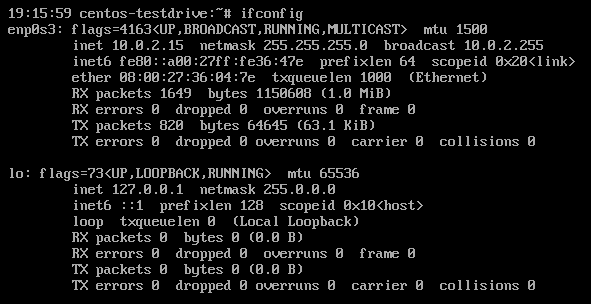 As for the reason why the interface names have lost their brevity, CentOS has posted the following reason in their FAQ, emphasis mine:

As to “breaking expectations”: The foregoing example uses a ‘traditionally’ named network device of: eth0. Other device names are also possible, including for example: em1 or p3p1 and such. Like it or not, this change in approach in interface naming is the future path for Linux.

During my tooling around over the last few days, I’ve amassed some information that might be useful to a future Dave (or even a real live actual other person).

Please don’t consider this to be a universal network protection solution. This config works for me because my boxes are hosted on mostly internal development networks, not the Internet at large.

How to convert a .VDI to a .VMDK that vSphere won’t choke on

When it comes time to actually deploy a VM to vSphere, the following command also helped me tons:

Bear in mind that if there are snapshots, this is likely to get the wrong version of the image you want.